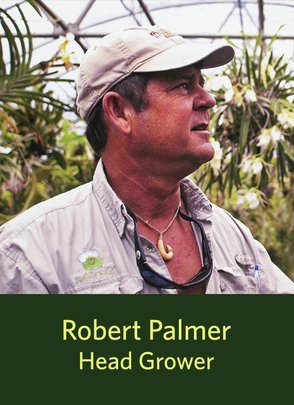 Born in New Orleans, Louisiana in 1956, Robert Palmer grew up in a household of plant-lovers. His father was an Ophthalmologist who grew bonsai, and his mother a housewife who grew orchids. By the age of five Palmer had his own large cactus collection.

In 1957, Palmer moved with his family to Florida and has lived in the Sarasota area since 1960. During his high school years at Riverview High School in Sarasota (1971-1974), Palmer played on the Varsity Tennis Team while holding down a plethora of part-time jobs. He worked in restaurants, did landscaping, cut firewood, and worked at Sun Bulb Company, Inc., then located on Bee Ridge Road in Sarasota.
A.P. Hollingsworth, the Founder of Sun Bulb Company, hired and nourished young Palmer’s interest in orchids by teaching him all he knew about the beautiful plants. It was then that Palmer realized that he wasn’t interested in a career sitting behind a desk everyday, but rather wanted to work outdoors.
After graduating high school, Palmer attended the University of Florida, in Gainesville, where in 1979, he received a Bachelor’s Degree in Ornamental Horticulture. While in college, Palmer worked at Schumaker Nursery, where his love of orchids and other plants thrived.

Without taking a day off, Palmer started working at Sun Bulb Company the day after his graduation from U of F. His first assignment? Attending a trade show in Tampa; spreading his knowledge and answering questions about orchids, bromeliads, and other tropical plants to enquiring minds.
Currently, Palmer is the Director of Greenhouse Operations at Sun Bulb, which has two locations in Arcadia, Florida and one in Apopka, Florida. He cares for over one million orchids and tropical plants each year in the Arcadia greenhouses and has personally developed the Better-Gro® brand of mixes and plant foods found for sale in retail stores, as well as used on all Sun Bulb and Sun Bulb partner crops. In addition, Palmer is accomplished in breeding plants – testing, trialing, tissue culture cultivation, etc. – creating 600 orchid hybrids from seeds as well as breeding hundreds of popular species for high market-appeal.
In 1981, Palmer moved to Bradenton, Florida, where he currently resides. He started his own nursery, Palmer Nursery, that same year. Currently, Palmer Nursery consists of an acre of greenhouses with a diverse collection of over 300,000 orchid species and hybrids. Palmer uses that facility for research and development work, doing chemical and plant food trials as well as hybridization and clonal selections.
Palmer has participated in five American Orchid Society sponsored orchid shows per year on behalf of Palmer Nursery, and in the last four years has received the show trophy for the Best Commercial Display in all but one event. In addition, he has won 30 American Orchid Society sanctioned flower quality awards as well as several cultural awards. In 2011, Palmer earned the title of “The Best Orchid Grower I Know” from the American Orchid Society, which announced the achievement in it’s popular “Orchids” magazine.

In 2014, while still working at Sun Bulb and Palmer Nursery, Palmer took on the role of Director of Growing and Production at CitriSun Nurseries, which has two locations in Arcadia, Florida and one in Apopka, FL. There, he is in charge of growing operations, facility repair/maintenance, greenhouse supply purchasing, building/grounds services, and setting citrus care guidelines. He is responsible for the healthy growth of 250,000 citrus trees per year. Palmer earned a Train the Trainer Certificate from the Florida Department of Agriculture and Consumer Affairs for the Citrus Research and Education Center in 2003.
Palmer is an honorary member of the American Orchid Society and active in a myriad of online social media groups geared toward orchids.
When he’s not in the greenhouse, Palmer enjoys fishing, collecting rare plants, and rescuing animals.